Especially for people who lie about their own life story to make themselves seem more interesting.

She Wrote a Memoir About Fleeing the Nazis and Being Raised By Wolves. It Was All a Lie.

Has anyone ever truly been "raised by wolves" outside of fiction?

That part right there seems like a glaring red flag for me.


The new doc “Misha and the Wolves,” premiering at Sundance, examines the case of Misha Defonseca, a woman whose bestselling Holocaust memoir turned out to be bogus. [Spoilers]

I'll just quote the first paragraph, because I think it should be enough right on its face to make any skeptic deeply suspicious.


It was on Holocaust Remembrance Day that Misha Defonseca chose to share her story of survival for the first time. Surrounded by friends and neighbors, she stood up at the Temple Beth Torah in Holliston, Mass., and told them—through tears—that after her Belgian parents were hauled off by the Nazis, she was placed in the care of a Catholic family who gave her a new name: Monique de Wael. Then, at the age of 7, she embarked on a trek from Belgium to Germany in search of her mother and father. Along her 1,900-mile journey, she witnessed pillaged villages and snuck in and out of the Warsaw Ghetto. When she came across a Nazi soldier attempting to rape a little girl, she swung into action, stabbing him to death with a pocketknife. As the Nazis closed in, she retreated deeper and deeper into the woods, living off entrails and worms. She was eventually adopted by a pack of wolves, who offered her warmth, companionship, and security.

I have a number of such cases, and not all of them involve Brian Williams or Joe Biden . . . or Hillary Clinton . . . or John "Manny Ortiz" Kerry . . . or a crapload of politicians. A fantastic documentary is The Woman Who Wasn't There about a Spanish sow who pretended to be in one of the towers during 9/11.

Trump's golf prowess fits Chris Rock's admonishment that it is like calling a "double-dribble" in the Special Olympics: "You just let it slide!"

Then we have "celebrated" Boston Pravda writer Kevin Cullen who claimed to "be there" during the Marathon Bombings, as well as decades of similar fabrications.

But then, religions are based on such nonsense.

Never forget the doyen of self serving liers ... 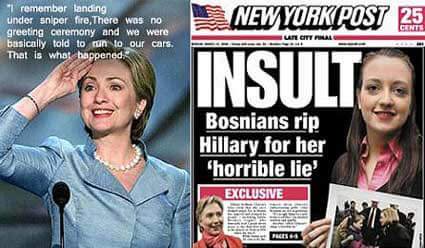 She stands so farabove wannabes that ony one example suffices for her to claim the win.

Wolves? Piffle. She had a wolf pack on the white house grounds that operated a foster care agency for unwanted black babies that weren't killed pre-natally. She IS a wolf.

See synonyms for doyen on Thesaurus.com
noun, plural doy·ens [doi-enz, doi-enz; French dwa-yan].
the senior member, as in age, rank, or experience, of a group, class, profession, etc.
n.b. that said, I suspect the country, on balance, would have been better off today had she defeated Trump.
This space for let
Top
3 posts • Page 1 of 1