Found this in the rather unsettling town of Arcadia yesterday.

What it is is a Gunner's Quadrant and is used to lay or aim a piece of artillery. These things came in a numver of variations thought the basic operation is the same. Assume you want to hit something, say, 2000 yards away. You, being a snowflake would be triggered by the word "hit" and would retire the the boys/girls room to have a good weep. The rest of us would say "what are the characteristics of the ammunition that we have/are using?"

Think about it: for a given round (projectile nd powder combo) an elevation of a given amount will result in a distance that is sorta predetermined. Forget atmospheric pressure (

) humidity, wind speed and direction and all that crap. Now things have been created that provide data for all the differnet ammo for all the different artillery pieces out there. Thats great but how is it implemented?

With a bloody Gunners Quadrant!!! Tell me you knew where this was going, please.

So a quadrant can work in a couple of ways. One is to have a scale with a measure of elevation (often degrees in older models). You would then set the degrees for the distance that you want (for the ammunition that you have),elevate the piece till it matches that number, pull the lanyard and watch what happens. There is actually a bubble level on thse things that will help in the process.

The thing I bought is different. Look at the scale 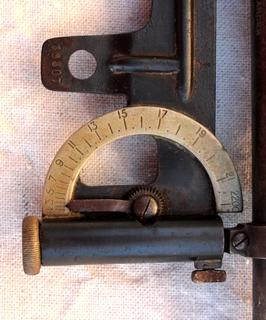 That does not look like degrees (or mils, the other way of measuring elevation) it looks rather like distances. Yards maybe? I don't know. What this suggests is that this thing is purpose built for one specific round. A round whose ballistics (coupled with a specific artillery piece) will be reflected in the settings of this quadrant.

How does this one work? Well, It would be attached to the piece, the distance would be set by turning the knurled screw on the bottom under the scale until the pointer move to the correct setting. The tube on top is a 1X telescope with a cross hair. You would elevate the piece till the cross hair was on target. Then pull the lanyard etc.

I believe that this piece is Swedish (or Icelandic but that is a stretch). Note the adjustment screw for windage (left and right) 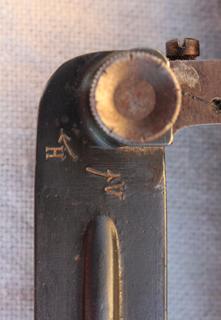 If they were good christians the letters would be "L" (for "Left") and "R" (for "Right"). "H" and "V" are unnatural. If one pokes around one will find that the words for left and right in Swedish can be abbreviated with those letter. Hence Swedish. Stupid Icelanders don't count.

How old? WW1 era maybe? The telescope is marked "Voightlander" which was founded in the mid 18th century. The engraving looks modern to my eye. Then again, the design of the thing would allow for a scope of ~1" diameter by any maker so who knows.

There are a couple of interesting features which I will not tempt fate by boring you with.

I have a handful of quadrants going back to the 1800's, this is the only one with an integral scope though.
This space for let
Top

Very interesting, at least to me.


Norwegian Skarpskyttergevær Model 1904 Kragicon Jorgensen in 6, 5 x 55. According to the listing- only 2750 pieces were built from 1906-1908. In 1908, only 582 were built and 250 sniper rifles. This piece has accompanying documents from 1941 including target, Voigtlander riflescope and transport box for a German Lieutenant during the war.

A snipers telescopic sight.
This space for let
Top

The M1A1 Gunner’s Quadrant is a portable precision leveling instrument used for laying artillery weapons in elevation, measuring their angles of elevation, and checking the elevation mechanisms of fire control equipment.

A few more. This one is made by Carpentier of Paris. 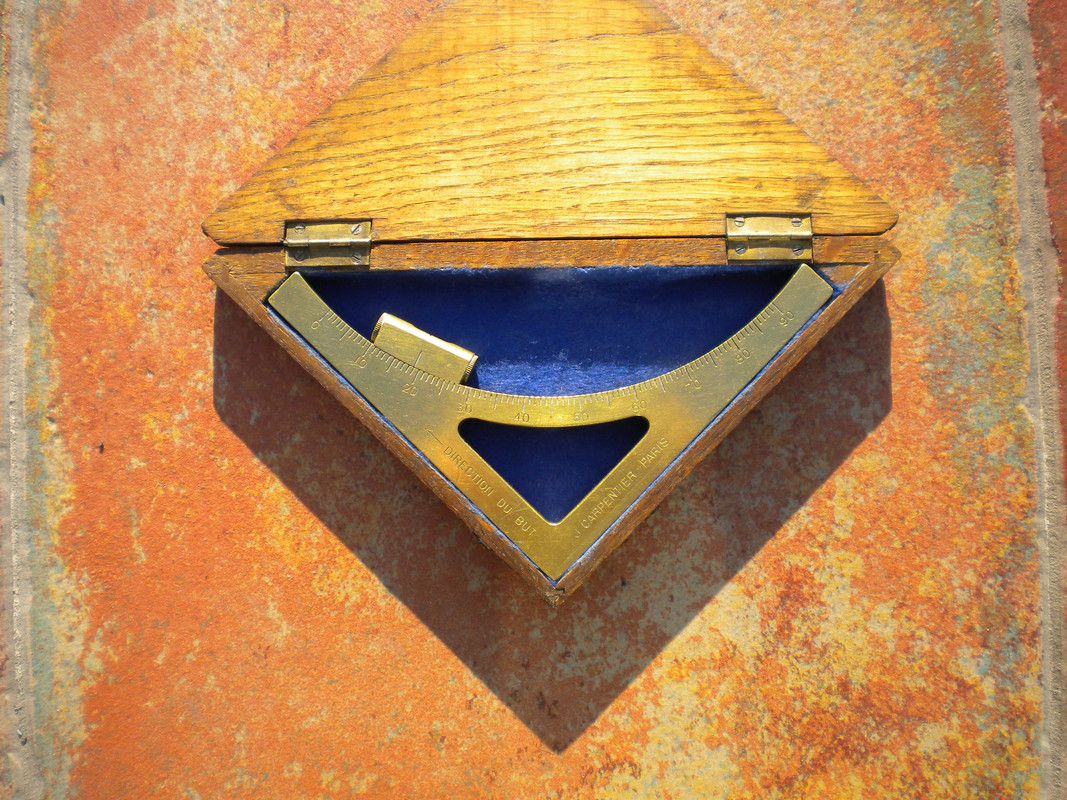 The inscription is "Direction Du But" which means "Target this way". It seems all of these things say the same thing. No idea as to date.

This is made by Taylor and Hobson in 1916. It has the Brit Broad Arrow acceptance stamp. 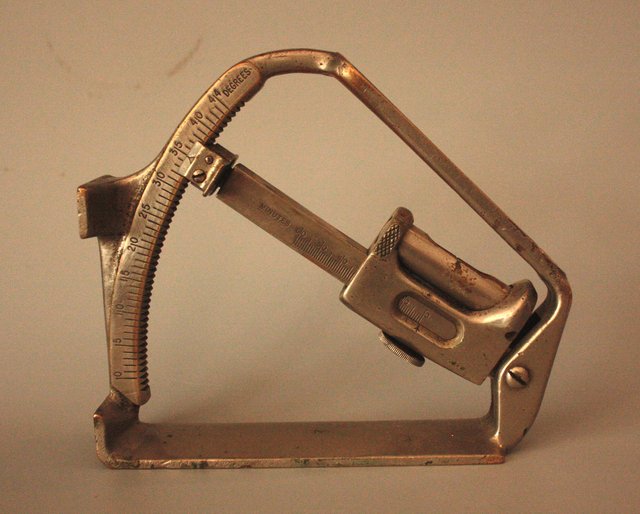 Just bought this one. I will not bore you with why. I wonder, though, if someone might venture a guess as to what this script says. 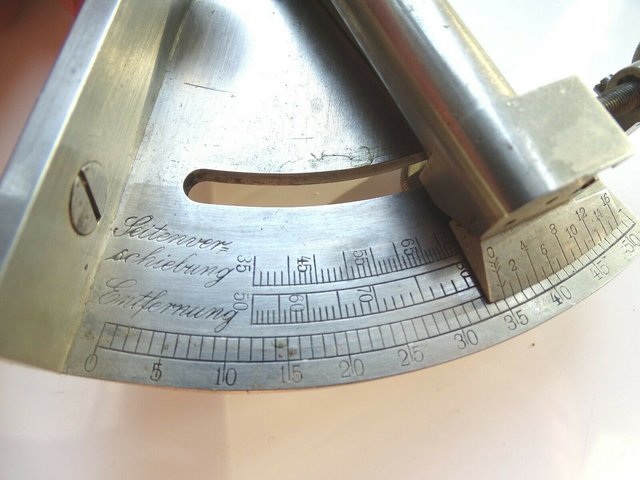 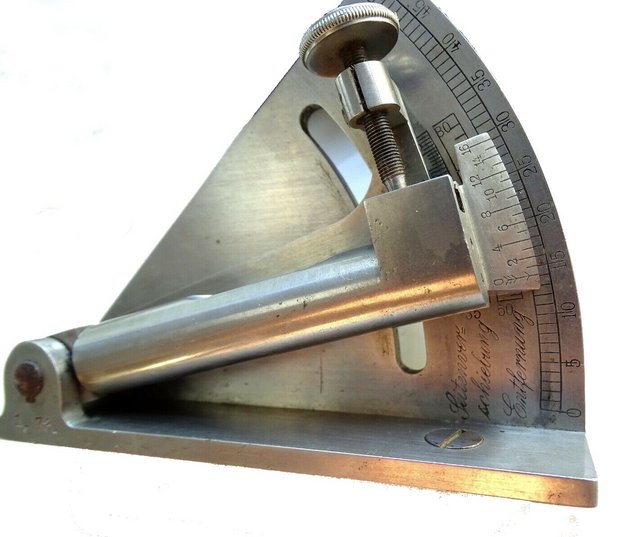 Hmmm ... lets think this thru ...
the deviation/distance scales are there as a reference and are not "accessed" by the arm of the clinometer. Sort of like a table of equivalents on the back of a slide rule .. am I dating myself???

I need a firing table ,,,,
This space for let
Top

Evidentially for a 7.7cm german field piece.
This space for let
Top

a. Drift Scale. This scale, which is printed in black, gives the projectile drift in mils. Since the projectile drifts to the right, the drift correction is always made to the left. Each elevation at which the drift is exactly halfway between the values is printed in red. Artillery expression is applied to determine the value of drift at each of these elevations. In determining drift, it is important to note that drift is a function of elevation. The corresponding portion of the TFT is Table F, Column 8.

Ok then. Rifling is always to the right. Learned something.

It is specific to a projectile/load/cannon and varies with elevation. Got it.
So at 80deg elevation, the drift is ~75 something or other. Meters? Wouldn't put it past the krauts. So you would use simple trig to move the piece to the left (given the range which you know since thats how you can use the damn clinometer in the first place!!) to adjust for x meters of drift.

God using metric so many times in a post makes me feel dirty.
This space for let
Top

Just got this. It's a Watkins Clinometer 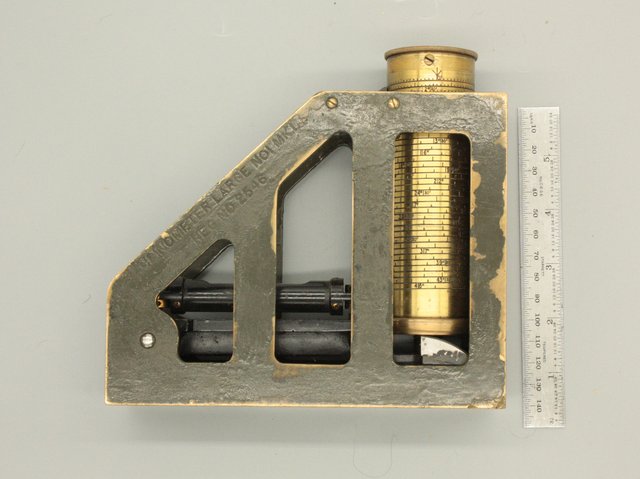 Screen Shot 07-19-20 001.JPG
Interesting thing. WW1 era. Painted olive drab over bright brass. Don't see a broad arrow but one can barely make out the maker
Seimans Brothers Co. Ltd. London
You do not have the required permissions to view the files attached to this post.
This space for let
Top
11 posts • Page 1 of 1