Asia Bibi: A "Blasphemer" Afraid of Her Country

Hot topics in delusion and rationalization.
6 posts • Page 1 of 1

The demonstrations against Asia Bibi’s acquittal were called off late on Friday after the protestors reached an agreement with the government.

The lawyer of a Christian woman in Pakistan who was acquitted in a blasphemy case on Wednesday fled the country early on Saturday fearing for his life amid nationwide protests by hundreds of radical Islamist hardliners, AFP reported. Protests broke out immediately after the verdict in Islamabad, Karachi, Lahore, Peshawar and Multan.

“In the current scenario, it is not possible for me to live in Pakistan,” 62-year-old Saif ul-Mulook told the news agency before boarding a plane to Europe. “I need to stay alive as I still have to fight the legal battle for Asia Bibi.”

On Friday night, the Tehreek-e-Labaik Pakistan party – which has primarily led the demonstrations – announced an end to protests after reaching an agreement with the government. The two sides signed a five-point agreement, according to which the government will not object to an appeal of the verdict that has been filed in the Supreme Court. Legal proceedings will now be initiated to impose a travel ban on Bibi and stop her from leaving the country. 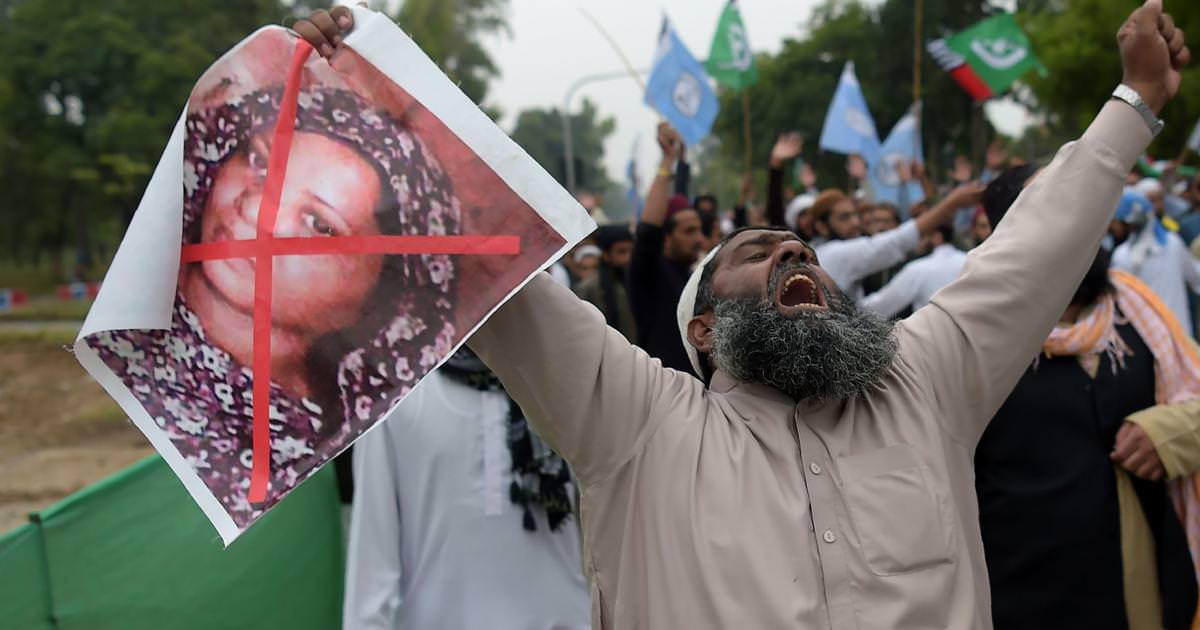 The Foreign Office has been accused of allowing government asylum policy to be dictated to by a Pakistan mob after it was confirmed it urged the Home Office not to grant Asia Bibi political asylum in the UK out of fear for the safety of UK consular staff.

Asia Bibi, a Christian woman acquitted of blasphemy, is seeking asylum after threats to her life in Pakistan. The former UK foreign secretary Boris Johnson was among many MPs calling for her and her family to be granted sanctuary in Britain.

The acquittal of the 53-year-old Catholic farmworker by Pakistan’s supreme court last month prompted demonstrations by hardline Islamist parties in Pakistan who had campaigned for her to be hanged.

She remains in protective custody in an undisclosed locationin Pakistan after the prime minister, Imran Khan, agreed to allow a petition against the court’s decision as part of a deal to halt the protests.

Her husband, Ashiq Masih, has appealed for help to Britain, Canada, Italy and the US but the UK high commissioner in Islamabad is reported to have warned he could not protect his staff if asylum was granted by the UK.

Tom Tugendhat, the foreign affairs select committee chair, asked the Foreign Office permanent secretary, Sir Simon McDonald, whether the episode “does not raise the question that either staff should be withdrawn or security increased or otherwise UK policy is effectively dictated to by a mob?”.

Tugendhat took the committee into lengthy private session after McDonald said he did not wish to give evidence in public on a such a sensitive issue.

Pakistan's top court has rejected a challenge to the acquittal of a Christian woman on blasphemy charges.

She was originally convicted in 2010 after being accused of insulting the Prophet Muhammad in a row with her neighbours, and spent eight years on death row.

She has always maintained her innocence in a case that has polarised Pakistan.

The Supreme Court's quashing of her sentence last October led to violent protests by religious hardliners who support strong blasphemy laws, while more liberal sections of society urged her release.

Hardliners had petitioned to overturn this ruling.

"Based on merit, this petition is dismissed," Chief Justice Asif Saeed Khosa said in court on Tuesday.

Asia Bibi - also known as Asia Noreen - was unable to leave Pakistan while an appeal request was pending.

"She should now be free to reunite with her family and seek safety in a country of her choice," Amnesty International said in a statement.

The sad thing, well one of many things, is that she still may not be entirely safe. Ask Salman Rushdie.
A fool thinks himself to be wise, but a wise man knows himself to be a fool.
William Shakespeare
Top

Why do you hate peace?