Thruster evaluation : NASA to be trusted ?

Witness wrote:Hadn't heard about that one. From their site I see they sell books & DVDs:

PEAR wrote:Margins of Reality
The Role of Consciousness in the Physical World

This pioneering work, which sparked intense controversy when it was first published two decades ago, suggests that modern science, in the name of rigor and objectivity, has arbitrarily excluded the role of consciousness in the establishment of physical reality.

Drawing on the results of their first decade of empirical experimentation and theoretical modeling in their Princeton Engineering Anomalies Research (PEAR) program, the authors reach provocative conclusions about the interaction of human consciousness with physical devices, information-gathering processes, and technological systems.

The scientific, personal, and social implications of this revolutionary work are staggering. MARGINS OF REALITY is nothing less than a fundamental reevaluation of how the world really works.

To work has the EM drive to be… conscious?

I spent many hours debating that THERE. In essence, it was a model of how not to do research. The "effect" was real, you see, so the inability to measure it was the result of bias, error and so on. They made a fine art of interpreting the nature of random fluctuation, and moving goal posts.
This space for let
Top

Here is their blatantly skeptical take on the current state of the EM Drive peer review. It hits some of the same points as the Thunderf00t video above and largely criticizes the same recent paper.

Killing me with humorous lines will not Clark Kent the egg salad. ~Skeptoid

It seems that our RIVER has run dry.
Top 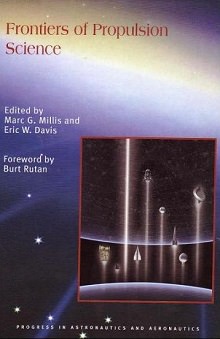 Progress in Astronautics and Aeronautics
Frontiers of Propulsion Science

Frontiers of Propulsion Science is the first-ever compilation of emerging science relevant to such notions as space drives, warp drives, gravity control, and faster-than-light travel--the kind of breakthroughs that would revolutionize spaceflight and enable human voyages to other star systems. Although these concepts might sound like science fiction, they are appearing in growing numbers in reputable scientific journals. This is a nascent field where a variety of concepts and issues are being explored in the scientific literature, beginning in about the early 1990s. The collective status is still in step 1 and 2 of the scientific method, with initial observations being made and initial hypotheses being formulated, but a small number of approaches are already at step 4, with experiments underway. This emerging science, combined with the realization that rockets are fundamentally inadequate for interstellar exploration, led NASA to support the Breakthrough Propulsion Physics Project from 1996 through 2002. Frontiers of Propulsion Science covers that project as well as other related work, so as to provide managers, scientists, engineers, and graduate students with enough starting material that they can comprehend the status of this research and decide if and how to pursue it in more depth themselves. Five major sections are included in the book: Understanding the Problem lays the groundwork for the technical details to follow; Propulsion Without Rockets discusses space drives and gravity control, both in general terms and with specific examples; Faster-Than-Light Travel starts with a review of the known relativistic limits, followed by the faster-than-light implications from both general relativity and quantum physics; Energy Considerations deals with spacecraft power systems and summarizes the limits of technology based on accrued science; and From This Point Forward offers suggestions for how to manage and conduct research on such visionary topics.

From a woowoo site, but as the result is negative:

Dresden (Germany) – After tests in NASA laboratories had initially stirred up hope that the so-called EmDrive could represent a revolutionary, fuel-free alternative to space propulsion, the sobering final reports on the results of intensive tests and analyzes of three EmDrive variants by physicists at the Dresden University of Technology (TU Dresden) are now available. Grenzwissenschaft-Aktuell.de (GreWi) has exclusively interviewed the head of studies Prof. Dr. Martin Tajmar about the results.

“We found out that the cause of the ‘thrust’ was a thermal effect. For our tests, we used NASAs EmDrive configuration from White et al. (which was used at the Eagleworks laboratories, because it is best documented and the results were published in the ‘Journal of Propulsion and Power’.

With the aid of a new measuring scale structure and different suspension points of the same engine, we were able to reproduce apparent thrust forces similar to those measured by the NASA-team, but also to make them disappear by means of a point suspension.

When power flows into the EmDrive, the engine warms up. This also causes the fastening elements on the scale to warp, causing the scale to move to a new zero point. We were able to prevent that in an improved structure. Our measurements refute all EmDrive claims by at least 3 orders of magnitude.”

In addition to the classic EmDrive, Tajmar’s team also analyzed the LemDrive-variation:

“This laser variant of the EmDrive is based on theoretical considerations by McCulloch. In numerous experimental set-ups, we have been able to show that both laser resonators and asymmetrical fiber coils do not show any forces that are above normal photon pressure. His theory (…we limit ourselves here to the laboratory standard and not to his astronomical claims), as well as the experiments cited by him are excluded by 4 orders of magnitude.

With both the EmDrive and the LemDrive, we have achieved a measurement accuracy that is below the photon pressure. That is, even if one of these concepts worked, it would be more effective simply to use a laser beam as a drive.”

In a third paper, the Dresden physicists then describe their research on the “Mach-Effect Thruster”:

“Here we have proven that the Mach-Effect-Thruster (an idea by J. Woodward) is unfortunately a vibration artifact and also not a real thrust.”

This is good news. A violation of the conservation of momentum that would make it impossible would fuck us all the hell up.

I think we've threaded on this before.
Top

In any case, looks like we're stuck on this shitty planet that we've ruined for a little longer. It's frustrating. How am I going to throw away my used Kuerig pods when the oceans are already full of them? I want a new planet to ruin.

Bruce wrote: ↑Sat Apr 03, 2021 5:13 pm In any case, looks like we're stuck on this shitty planet that we've ruined for a little longer. It's frustrating. How am I going to throw away my used Kuerig pods when the oceans are already full of them? I want a new planet to ruin.

Yes Bruce, man really is stuck here but our garbage would not mind even the most hazardous space flight. We need Elon to start Garb-X, the interplanetary sanitation program.
Top
48 posts