One key idea in the paradox is it can’t be dust causing the sky to be dark, explained below


While dark clouds could obstruct the light, these clouds would heat up, until they were as hot as the stars, and then radiate the same amount of light.

But this is simply not true. Dust does heat up, but it pretty much never radiates light we can see. It never ever glows like starlight.


Astronomers used to consider dust as a nuisance because it absorbs the visible light from objects, keeping them hidden from our optical telescopes making the Universe appear very dark and hiding a lot of interesting things from us.

https://herscheltelescope.org.uk/science/infrared/dust/
Last edited by robinson on Sat May 01, 2021 1:51 pm, edited 1 time in total.
still working on Sophrosyne, but I will no doubt end up with Hubris
Top

The die hard believer might counter it will after more time, but that is also not true.


If the light was being blocked by large gas clouds, for example, then given the age of the universe, they would’ve absorbed enough energy from the blocked light to emit light of their own. So they wouldn’t be dark.

http://thehappyneuron.com/2021/02/why-i ... s-paradox/
still working on Sophrosyne, but I will no doubt end up with Hubris
Top

“For an infinitely old, infinitely large universe which is both homogenous and isotropic would mean that no matter where we looked, we would see photons from starlight steaming towards us and this should mean that the night sky is bright. But it is not, so the universe must be bounded in some way.”

The argument is over the age and size of the Universe, as well as red shift and the Big Bang and the expansion of space time.

Big meaty questions and arguments. But the simple facts are ignored, and shit is made up, and it bugs me when I look at the size of both the andromeda galaxy, and our own Milky Way in the sky 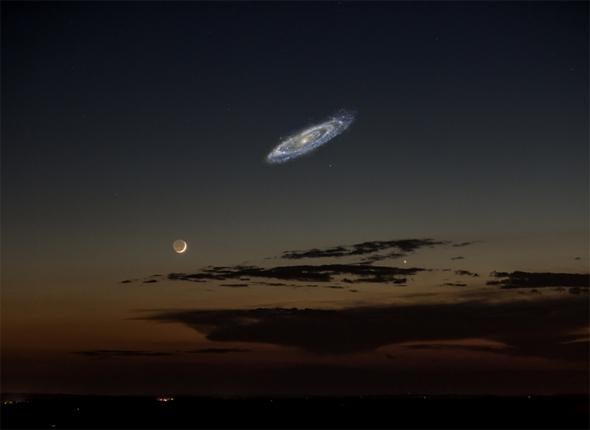 There isn’t any redshift involved in looking at our galaxy, or Andromeda

Wrote about, puzzled over

An area of the sky that is so filled with stars, well let us read it from Poe himself

“Were the succession of stars endless, then the background of the sky would present us a uniform luminosity, like that displayed by the Galaxy–since there could be absolutely no point, in all that background, at which would not exist a star.”

So forget the big picture, why is center of both our Galaxy and Andromeda so dark?

That’s the reality, they are dark

And no matter how many billions of years the dust absorbs all that starlight, it never is going to glow as bright as the stars, or our sun
still working on Sophrosyne, but I will no doubt end up with Hubris
Top

That is all
still working on Sophrosyne, but I will no doubt end up with Hubris
Top
5 posts • Page 1 of 1